A Custom Profile for the MillerCoors Brewing Company

At the NASCC Steel Conference in March of 2017, we met with an engineer about a project for the world famous Coors Brewery in Golden, Colorado. The project required a custom shape to replace existing stainless steel rails that dated back to the 1960’s. 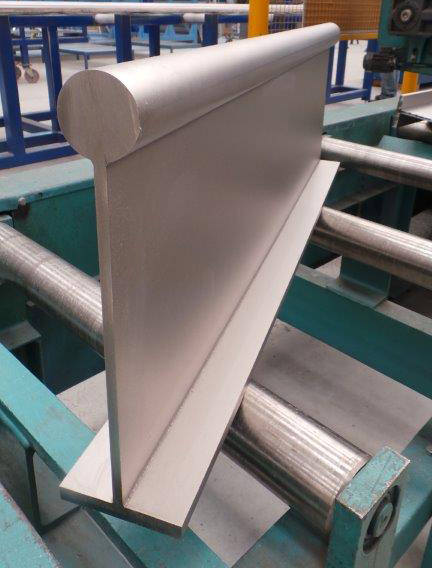 The Coors Brewery in Golden, Colorado is one of the most famous breweries in the world. When people here Golden, Colorado, they immediately think of Coors. The brewery was first established in Golden in 1873 by Adolph Coors and Jacob Schueler. Just a few short years later in 1880, Coors bought out Schueler and became the sole owner. Coors operated on its own for over 100 years until merging with Molson in 2005. Molson Coors and SAB Miller are the two parent companies to what is now known as MillerCoors.
Today, the brewery is the largest single-site brewery in the world. It has a production capacity of 22 million barrels of beer per year. Iconic brands such as Coors Banquet, Coors Light, Colorado Native, and Blue Moon are brewed at this location. Even with such a large capacity, Coors Golden is a “landfill free” brewery. Almost 100 percent of all the brewery waste is either reused or recycled.
Coors was also the first company to use the aluminum beverage can instead of steel. They even offered money for every can returned to the brewer, which helped introduce the thought of recycling to the American public. At the same facility in Golden, MillerCoors is home to the nation’s largest aluminum can manufacturing plant, measuring over one million square feet and producing 4.5 billion cans per year for Coors breweries. Coors offers daily tours of this iconic brewery to the public and even offers free beer to the visitors. It is a must see if you are in the Denver or Golden area.

For this project, MillerCoors was looking to replace over 500 feet of track for the existing monorail that is part of the malting process. Malt is made from whole grains and is the basic ingredient used in the production of beer. The monorail is used to carry large batches of ingredients through the different stages. In total, the track is over 2,000 feet but since they are replacing in stages, we had to produce a custom profile that matched the existing track shape. The original shape was configured using a mix of stainless alloys with it having a 17-4 base, a 304 web and a 304 pipe at the top. Basically, it was a tee bar with a pipe on top. The best production method for this custom shape was laser fusion because it allows us to fuse different alloys together.
Alloy 17-4 stainless steel becomes very brittle and difficult to work with when heat is applied so we had to find an alternative alloy to use for the base of the tee. We worked with the engineer and it was determined we could use 2205 Duplex because its yield strength and corrosion resistance was sufficient for the job. We also determined that using pipe for the top of the rail would be difficult to laser fuse and keep straight so we offered using a solid round bar instead. This alternative design was accepted and we provided a sample for MillerCoors and Industrial Constructors to approve.
After approval, we produced the shapes and delivered on time to the brewery in Golden for the install. Early reports are that the shape worked very well and both the contractor and MillerCoors were very happy with the results. Eventually more of this track will be replaced with the same custom laser fused profile.

A Solution for Difficult Designs

At Stainless Structurals, we pride ourselves on helping engineers, architects and designers think outside the box and help make their most complex design a reality. This custom section for the Coors Brewing Company is just one example. Please contact us today for a solution to your next design.

A New Standard in Designing with Stainless Steel
January 19, 2022
Search our site
Follow us